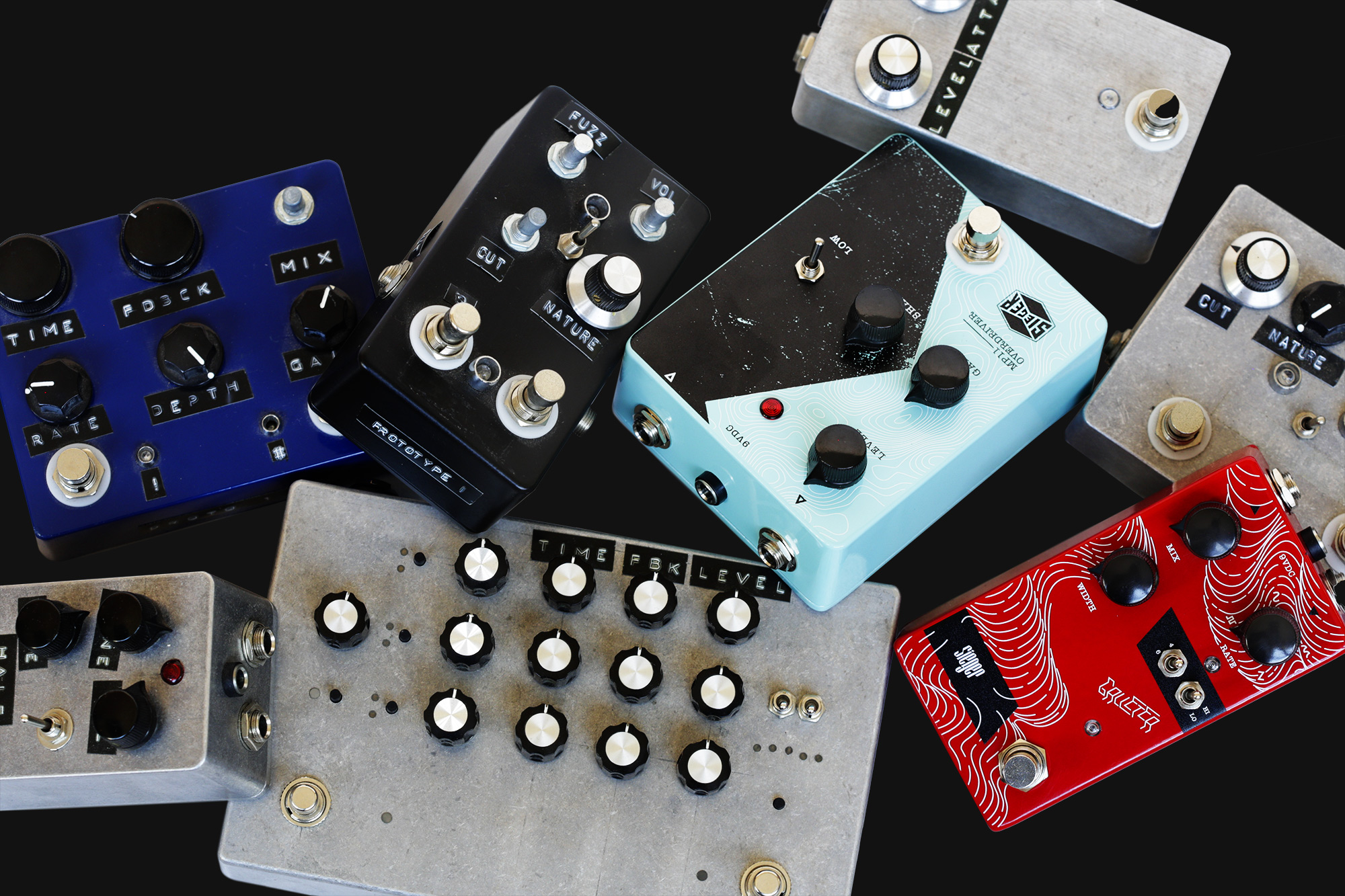 I started building audio circuits on breadboards while I was a engineering student. I collected piles of schematics from all sorts of pedals, pre-amps and equalisers. Most of these circuits invariably never worked when I tried to run anything signal through them. Slowly I would break them down and learn what each component did, where I’d made mistakes and how to change them to appease my own ear. I started to build pedals, signal switchers and other electronics for myself and others; below are some of the highlights. 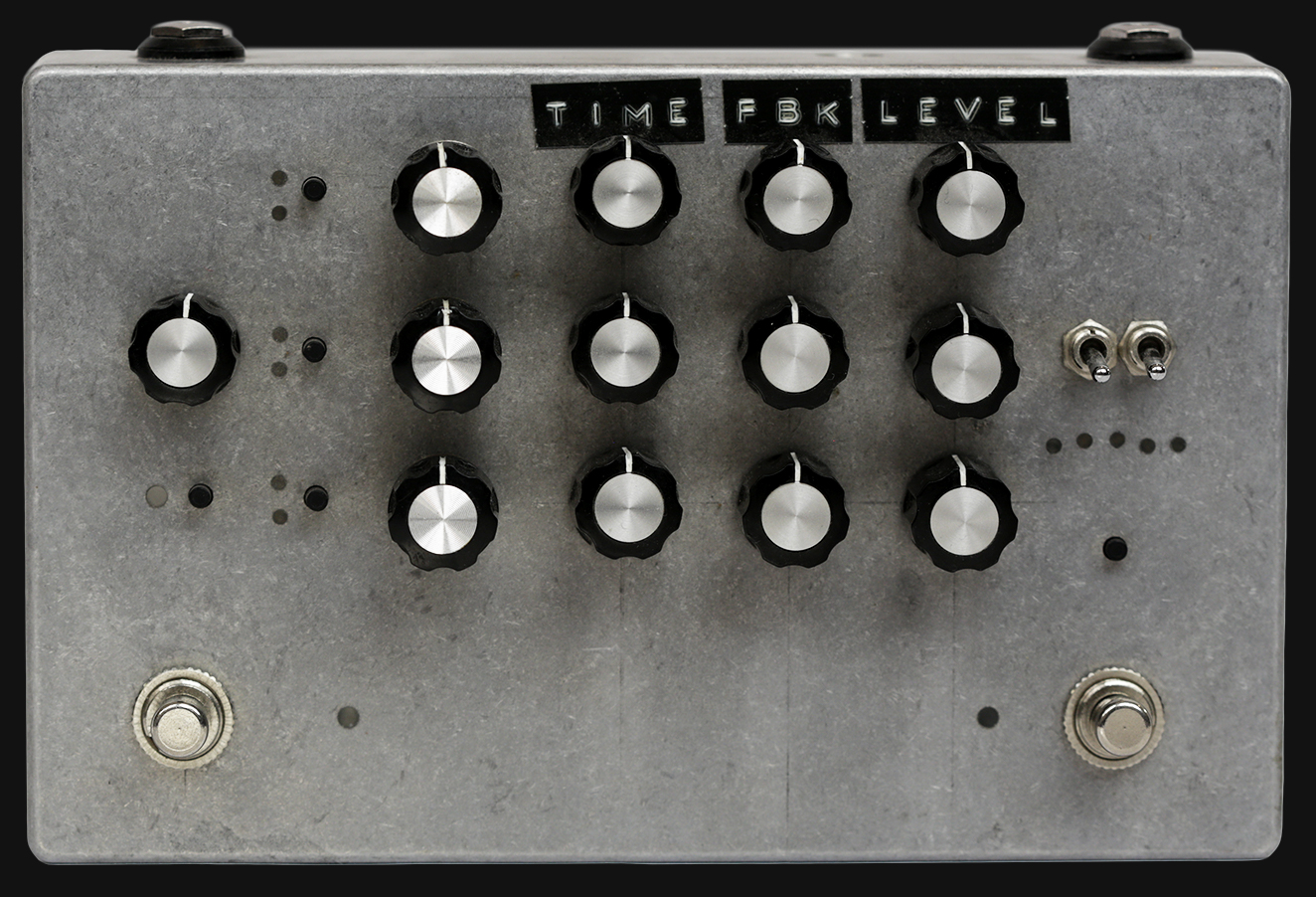 ‍Three pitch shifters driving three parallel delay lines - that was the idea that sparked this design. There are controls for pitch interval, delay time (from 1ms to 1.5 seconds), feedback (0% to 100%) and delay level. One foot switches bypass or activates the effect (configurable for true bypass or buffer with delay trails active), while the other is a tap tempo input for master tempo mode.

In this mode, activated by setting the ‘Lock’ toggle to on, the delay time control becomes a division control (1:1, 1:2, 1:3 or 1:4). This mode synchronises all the delay times so that rhythmic patterns, arpeggios and crystalline echos can be created. When ‘Lock’ is disabled, the delay time can be set to any time, opening the effect up to timbres of chaotic echo, pseudo spring reverb, comb filtering and more.

The audio input is processed by a Microchip dsPIC 16-bit microcontroller and the user interface is serviced by another Microchip 16-bit microcontroller. Parameters from the user interface are sent to the DSP engine, including user presets. This project was shelved after the delay engine and user interface was complete. The dsPIC does not have enough processing power to perform all operations required and produce the desired effect. In order to achieve ‘real time’ pitch transposition there needs to be minimal delay between input and output (less than 20~30ms); ultimately this is not possible with the current architecture.

I still believe that the core idea of this effect is exciting and there are other interesting spins on these fundamental building blocks that should be explored. I included a toggle for three distinct DSP modes, the initial ideas were something like this:
- Parallel pitch shifters into parallel delay lines
- Parallel pitch shifters into parallel delay lines, with some audio from each line 'leaking' into the other, automatically and randomly modulated
- Three units in series, with the output of each delay line feeding the next

The MP11 OVERDRIVER is a silicon/germanium hybrid overdrive featuring two NOS Germanium MP11 transistors. It's a four transistor design not unlike a Big Muff but it makes no attempt to approximate such things. It can take you from kind of clean with a bit of soft clipping and colour through to saggy, exploding amp distortion.

The process of designing this circuit allowed me to align my ear with the choices I was making in the design. It’s made up of an input amplifier, two additional gain stages (which are responsible for the more ‘intentional’ clipping) and an output amplifier.

A lot can be achieved by adjusting the gain structure and frequency response of each of these stages, as well as the placement and design of any equalisers within it. 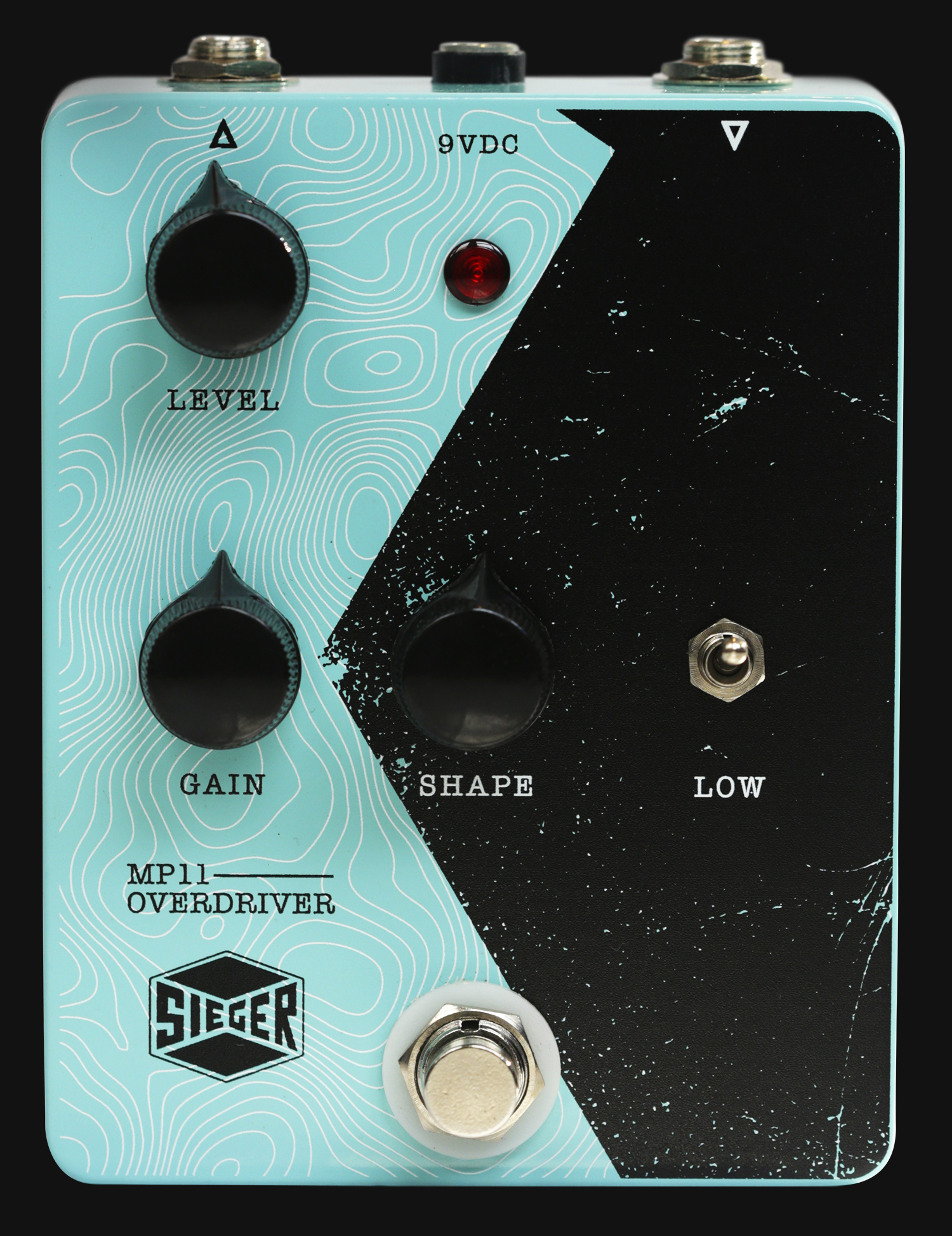 I designed a novel ‘Shape’ control in simulation that attempts to follow the same rules players are used to (CCW = darker/less treble, CW = brighter/more treble) but with some subtle shaping of the mid-range and less dramatic high frequency roll off. The goal was to ensure that every setting sounded akin to the character of the pedal, but was also flexible enough to dial in the right balance for different amplifiers, instruments and rooms. A toggle for ‘LOW’ was also added, to cut some low frequency content if required.

I needed a phaser for a band I was playing in, so I built one. Then I build three more and put all of the best parts into the Galletea. Phasers are often the most simple and unified effects, I broke out a few controls that I was adjusting a lot during the design. The circuit is built from four or six (switchable) OTA all-pass filters that are modulated by a numerically controlled oscillator (NCO). An 8-bit microcontroller runs the NCO, which can output four different waveforms: sine, triangle, square and exponential sawtooth. The microcontroller also controls the relay bypass and status LEDs.

An additional control for ‘Width’ sets the maximum range of the modulation and the ‘Mix’ control blends between the modulated output and input signal. This moves the effect from subtle phaser, through standard 50/50 phasing and ends with 100% wet signal, creating a watery vibrato effect.

The ‘Rate’ control is dual function, either setting the rate of the NCO or (while holding the footswitch) changing the waveform. A ‘HI/LO’ toggle sets the NCO rate range from very slow (~0.1Hz) through to low audio rate, with a lookup table mapping the values so that the entire range is easily controllable and usable.

This circuit is a happy marriage between a classic analog effect and the flexibility and scalability of digital control. I have used the NCO in other projects as well as a design tool, allowing the trial of any waveform with relative ease. Since it leverages lookup tables for rate (the increment of the phase accumulator) and DAC output, custom waveforms and control curves can be generated and included as required. 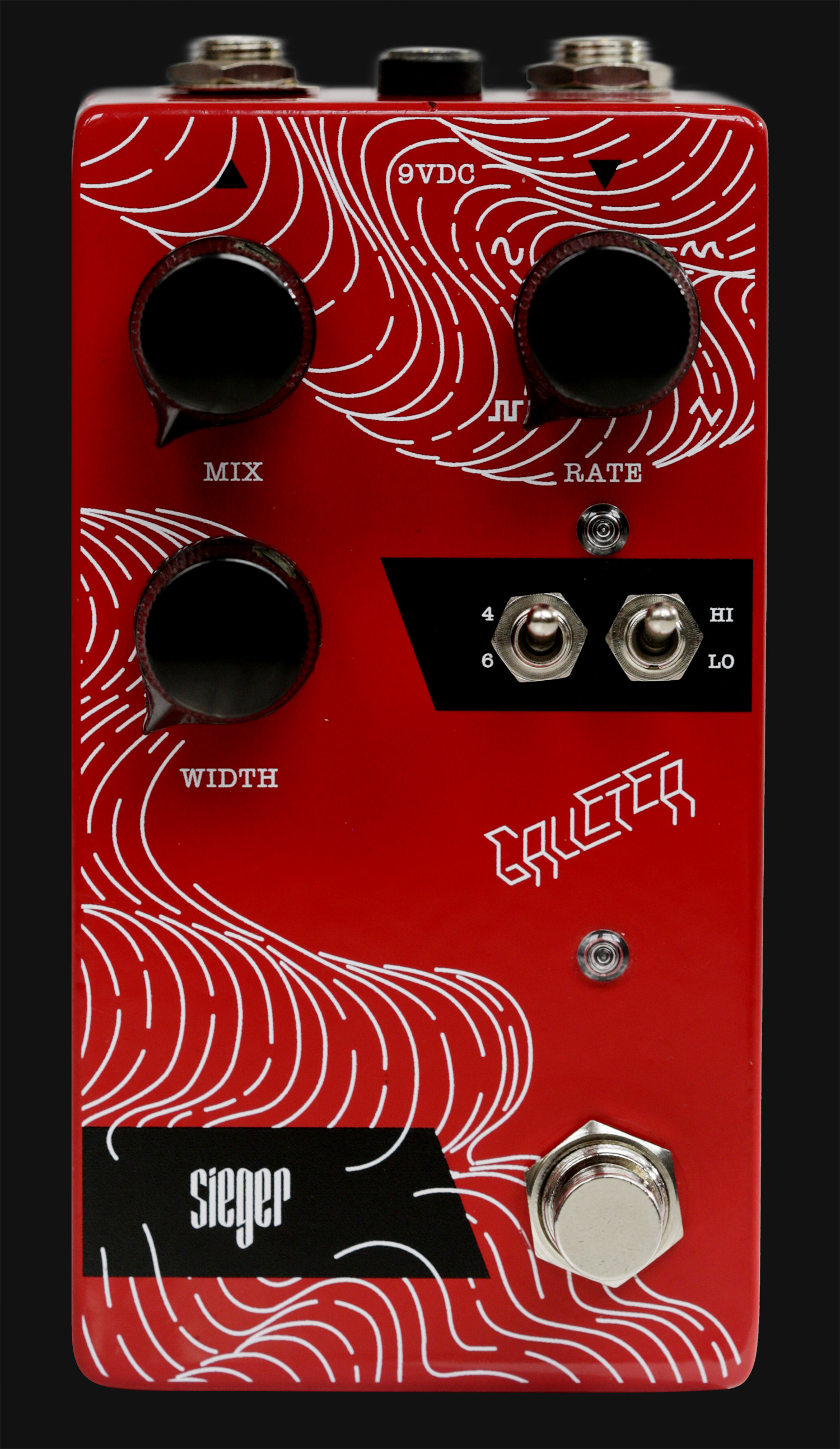 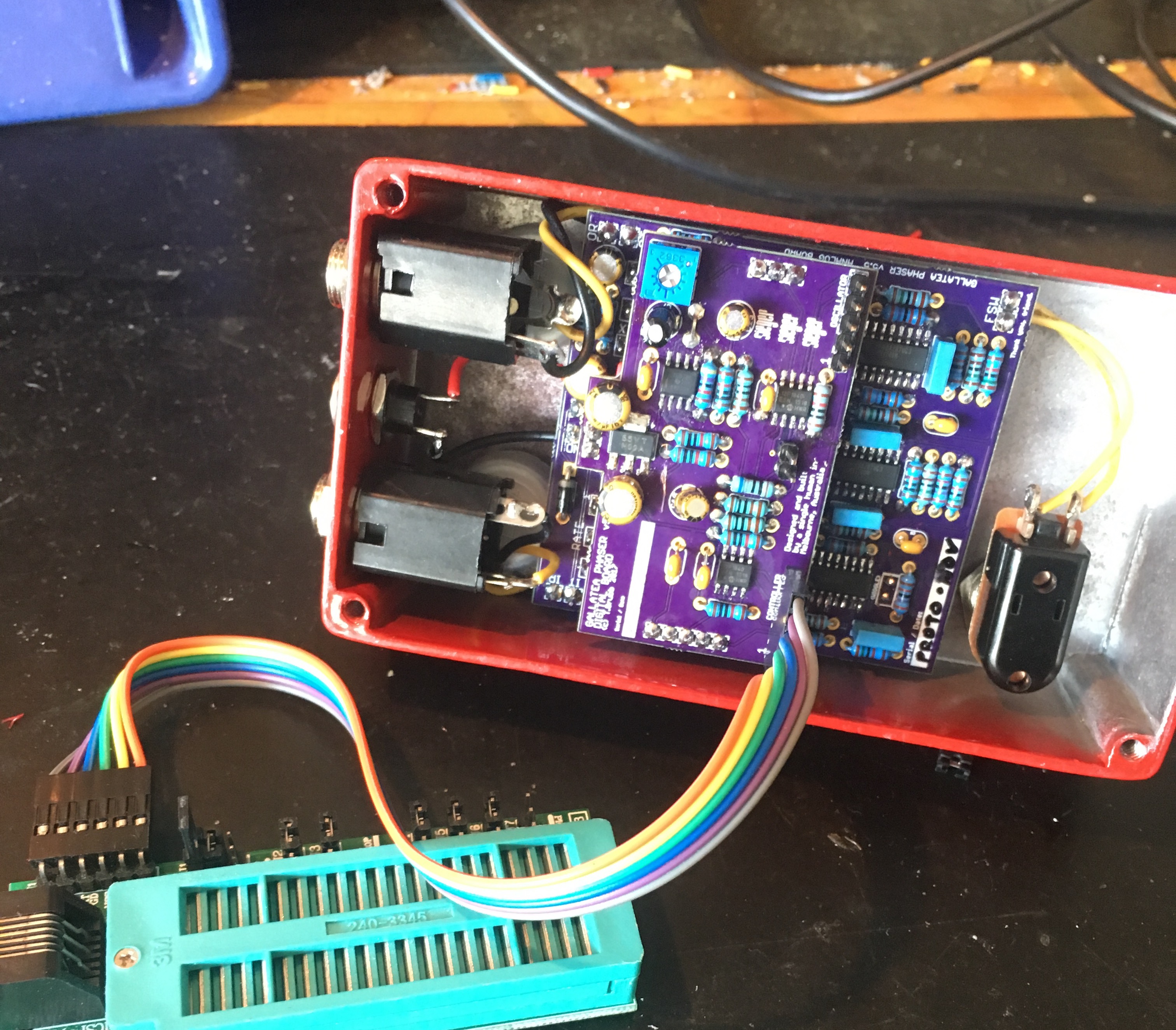 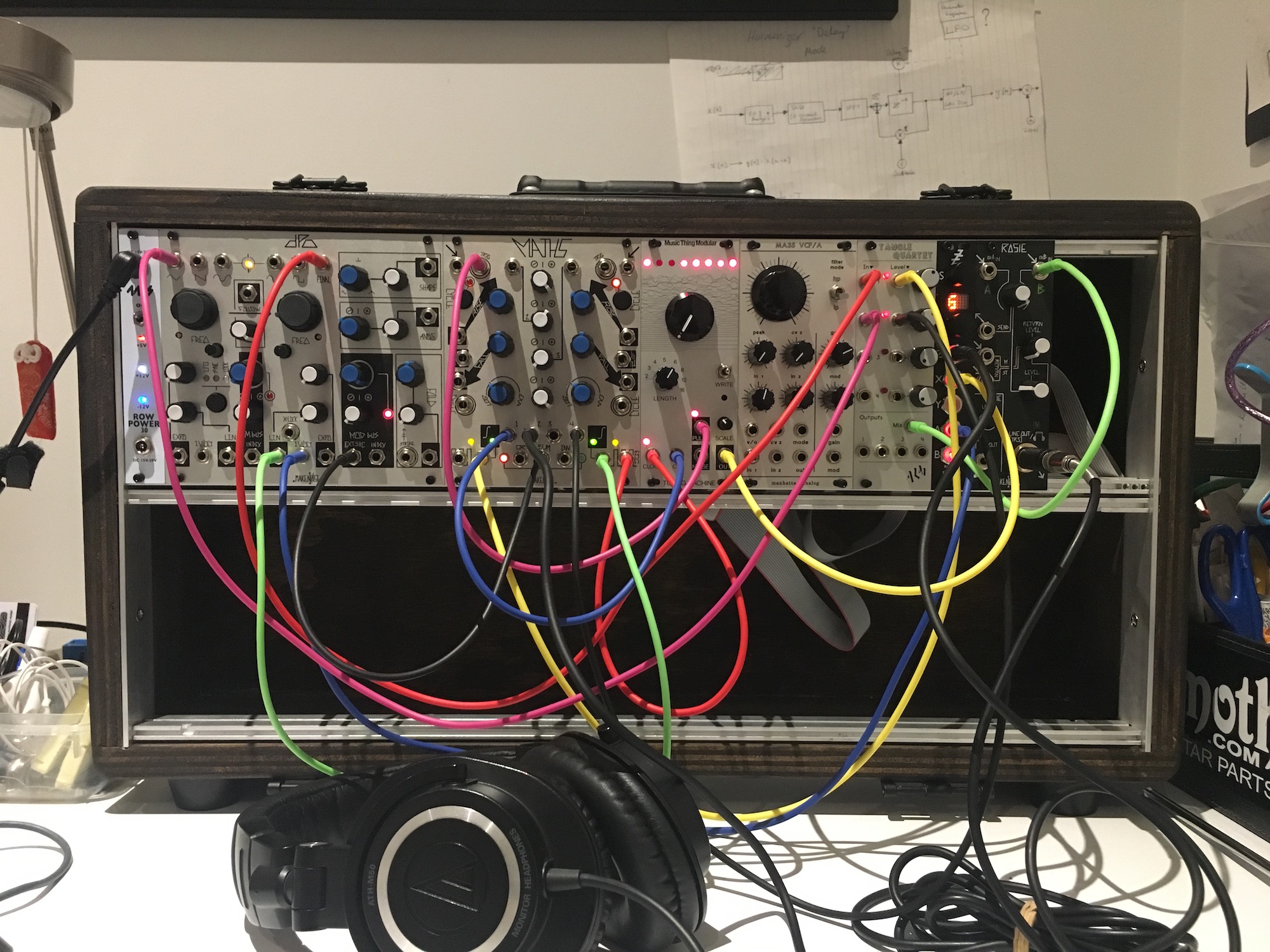